Hi guys, I’m sharing the layouts of my th12 trophy base today. The purpose is to help all TH12 players to defend their trophies better and hopefully it will give you some inspiration for your own designs.

I’ll make a separate blog entry for TH12 war bases but I thought these th12 trophy/farming bases are important too because a lot of fellow TH12s are struggling to protect their trophies. 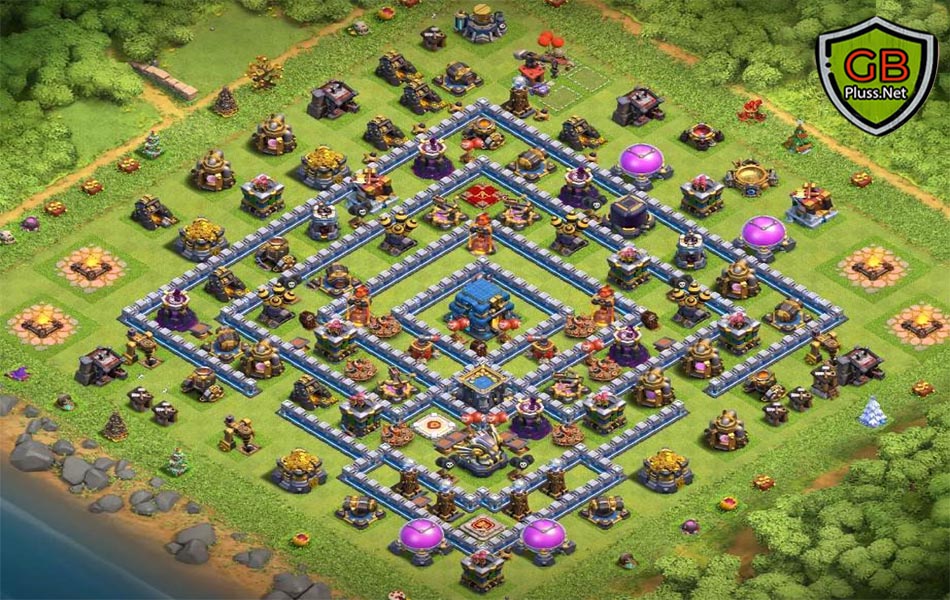 My clan mates and I have been using these layouts for a few months now and they’re very effective against opponents from our trophy range especially during wars. Yes, we lost some defenses but not as much as expected with such low loot protection. My clan is very active so we attack many times in a week. 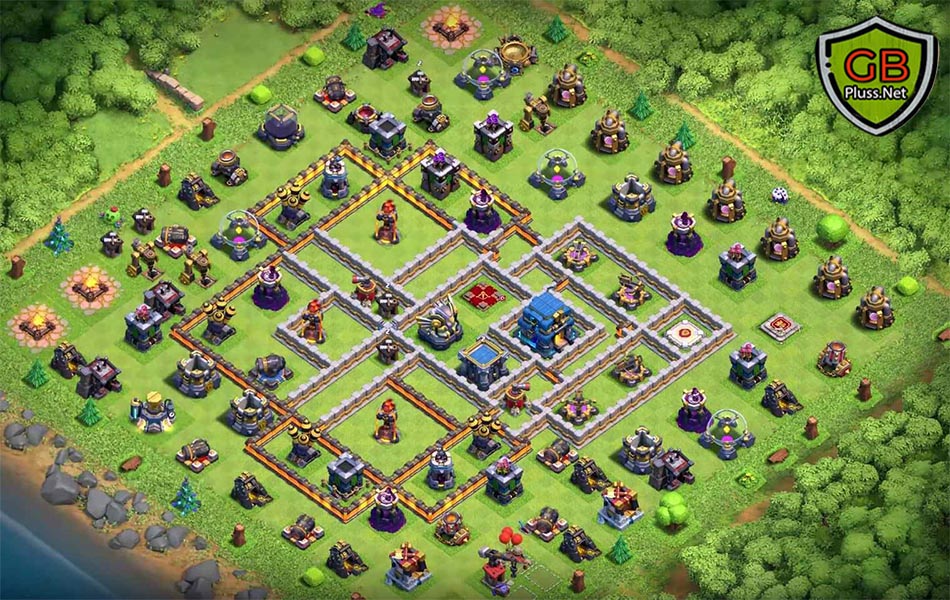 I would like to mention that the only difference between farming bases and trophy bases is the loot protection because loot bonus depends on your TH level but trophies doesn’t. So don’t over protect loot just for farming purposes or you’ll find yourself losing more trophies than you gain loot. 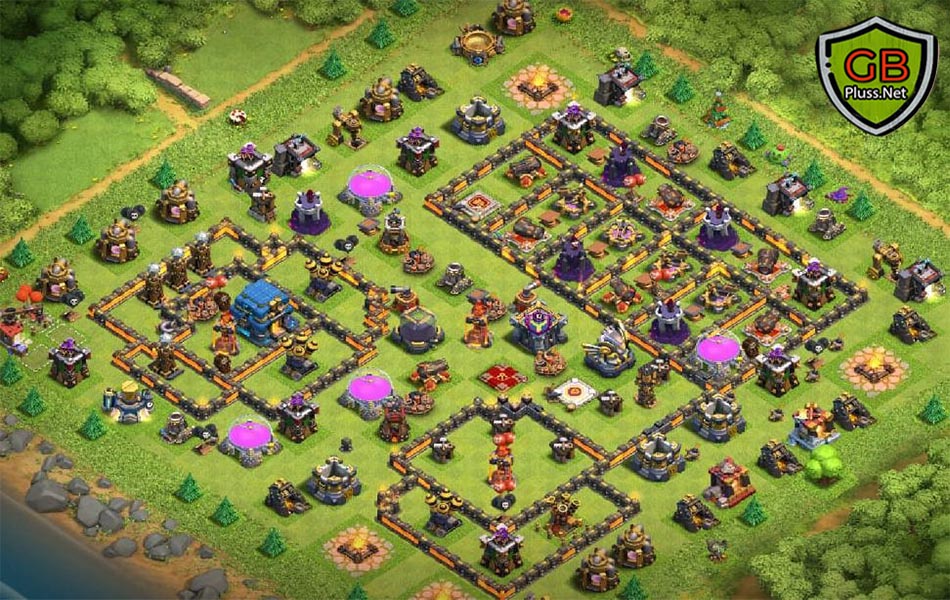 The bases that I’m showing you here are with 50% resources protection. If you’re farming, you can lower it to 40-45% (35% for TH12 is fine too). It’s better to have a little less loot and protect your trophies than vice versa. I also recommend checking our clanmates’ bases given below. We have lots of good farming and war base layouts that you can use/modify to suit your own needs. 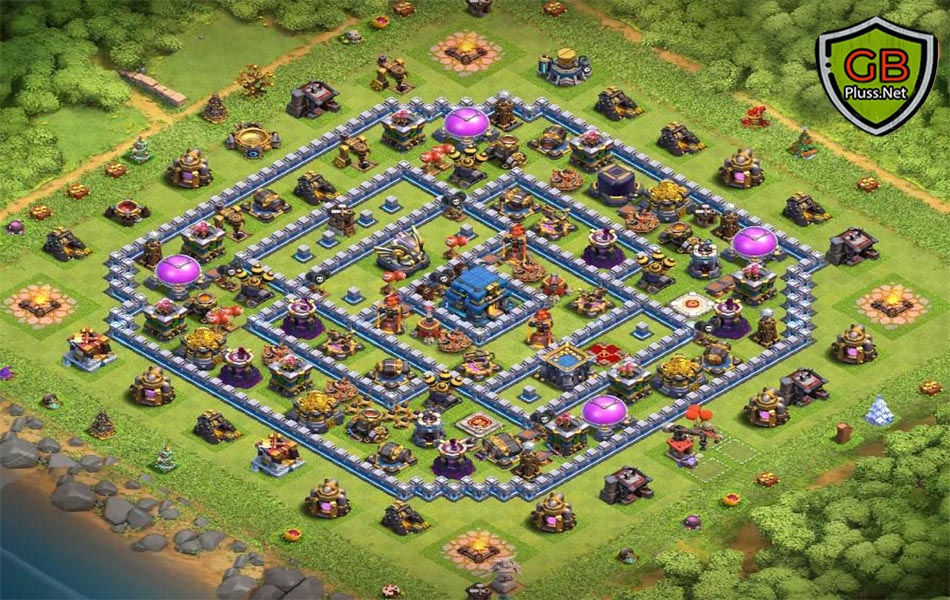 My clan mate base is almost the same as mine so I recommend checking it as well. He’s also using the same style but his layout is a bit different from mine. You can check his video on how he uses it too. Upgrading as always is the same as other clash of clans base layout. 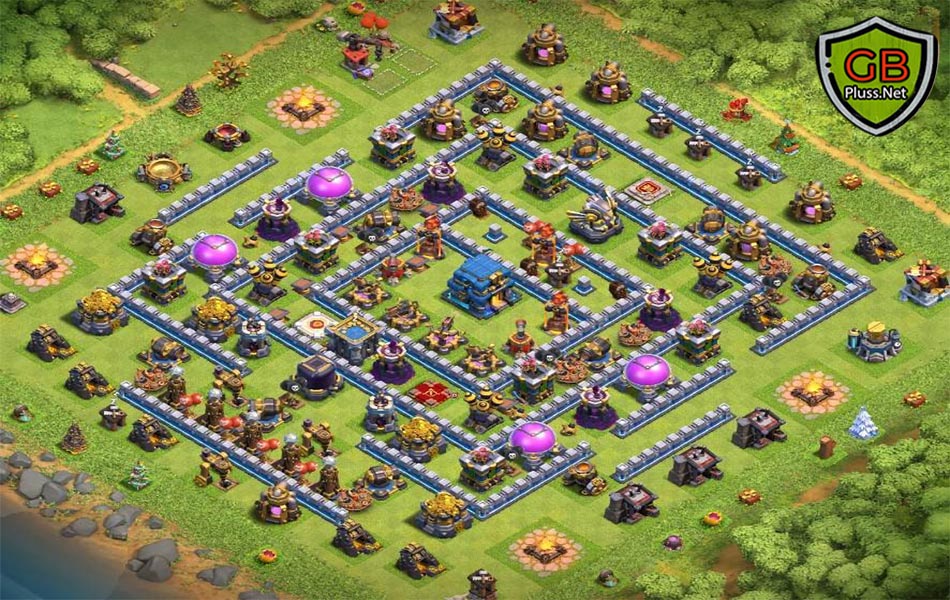 He’s also sharing the layout of his TH12 trophy base which I find very effective. You can check it out in the given image.

So without further ado, let’s jump into the bases!

*I didn’t include the clan castle troops to keep it simple for now. 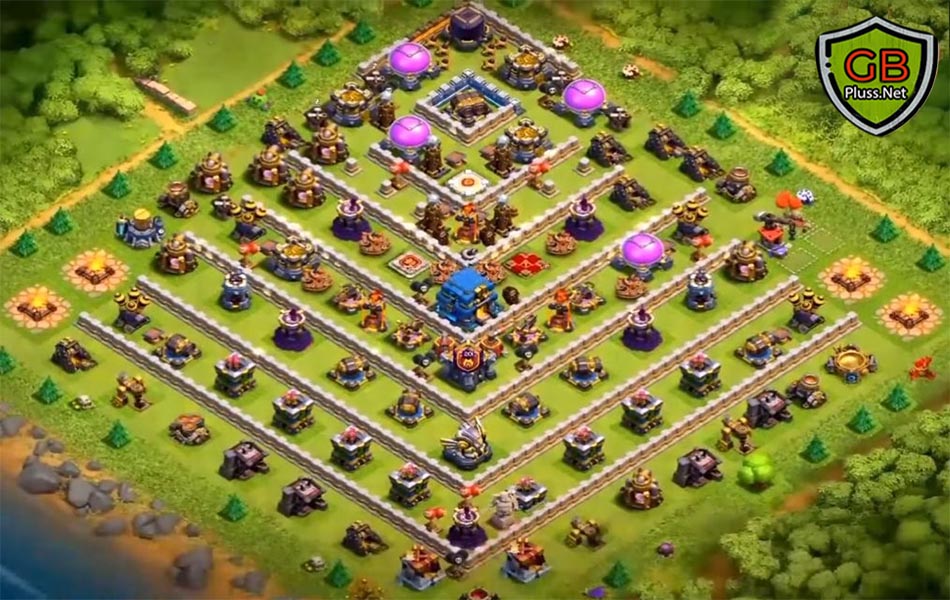 The first layout is the best one that I’m using at TH12. This layout is good for farming purposes because the only storages that are exposed are the collectors. It’s very effective against low to mid level players because they will usually attack collection of storage near the core instead of collection of gold storages which is what you want them to do. You can see that I’m not putting any traps on this layout because the only priority here is not losing any loot. 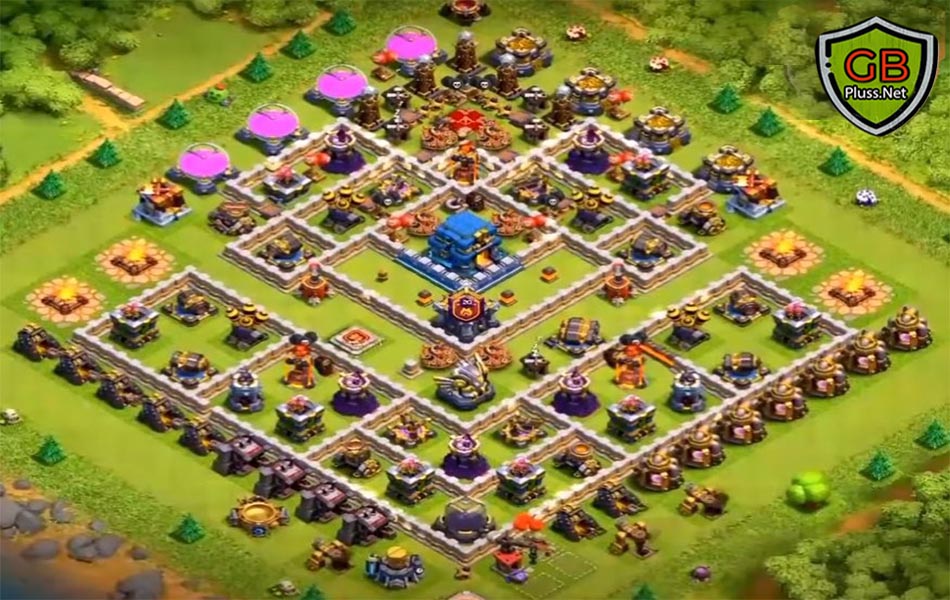 The second and third layouts are also trophy bases and should be able to protect your trophies against opponents from around your Town Hall level except those that will use air attacks or jump spells. As you can see, I’m using golems to soak up damage so my own troops remain safe and my enemy is wasting their troops and spells. I’m also using the poisonous spell to take out a few extra troops here and there. 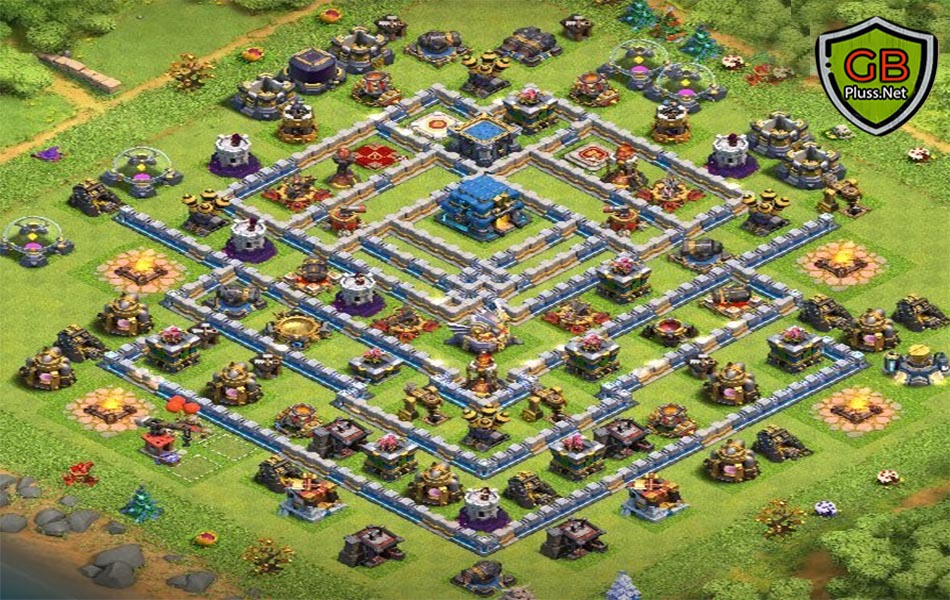 The last layout is my TH12 hybrid base with 50% elixir protection; it’s exactly the same as the first base but just protecting half of my loot with air defense instead of golems. So you can use this base if you’re not pushing trophies or just want to protect your loot better. It’s good enough to protect against opponents from around your Town Hall level for farming purposes. 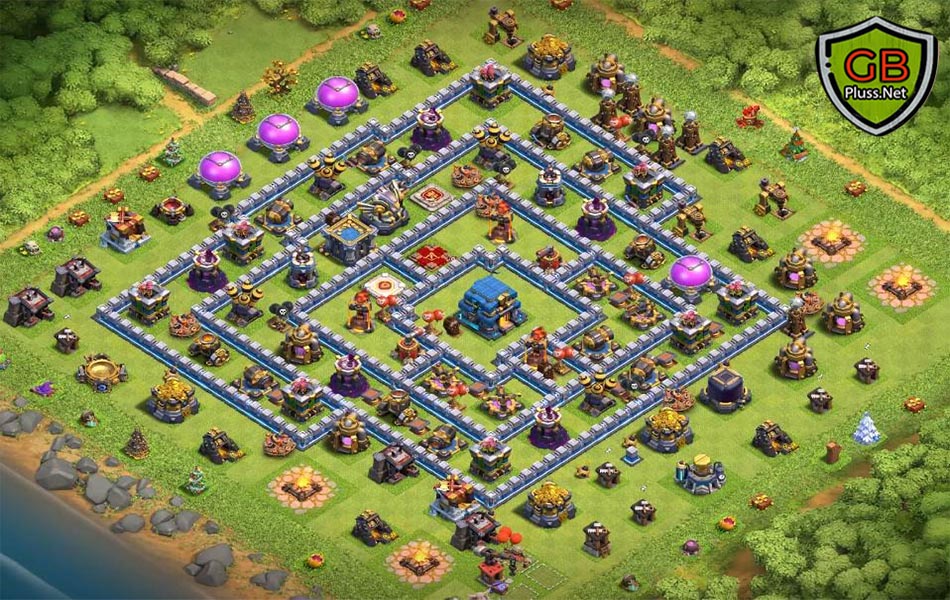 If you have any questions about the layouts, please don’t hesitate to ask me in the comment section below. If they are school or work related, I’ll be answering them after I graduate/work next month.

I hope this article will help you a lot in improving your farming and protecting your trophies. 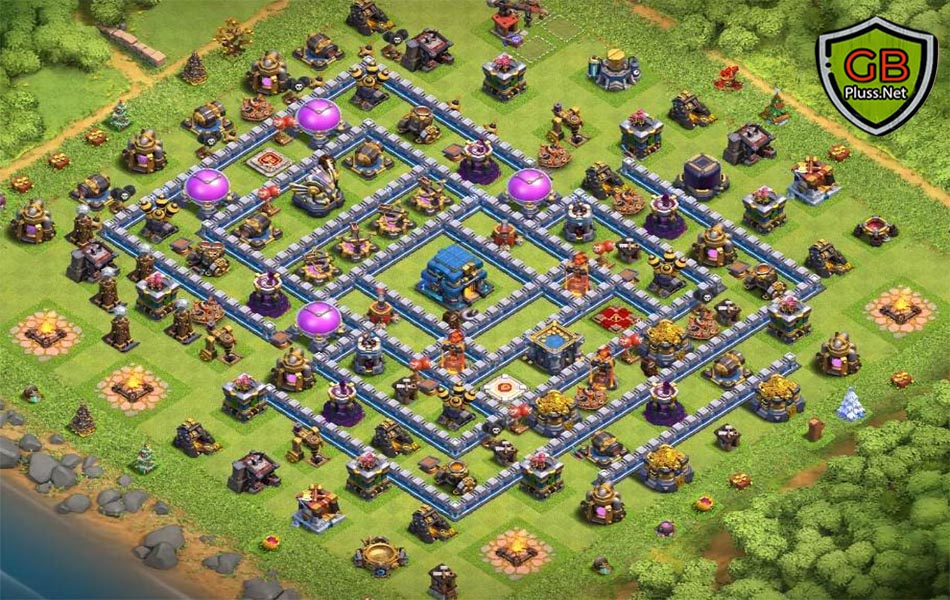