Hi I’m your clasher friend and today I’ll be sharing with you some TH9 Trophy bases that are designed specifically to protect trophies. This TH9 trophy base will not only keep your trophies safe but also prevent farming.

You can view the th9 trophy bases in action here. The channel contains replays of each base being attacked by 4 maxed attackers (the number varies depending on what trophy range the base is designed for).

The bases are generally more vulnerable to hogs, balloons and golems. I made the town hall 9 trophy layouts specifically to make it easier for you to position your heroes against these attacks. You can also use giants instead of wizards or lava hounds instead of balloons but I found that the suggested troops work best because they target the outside buildings that are hard to reach with hogs/balloons. 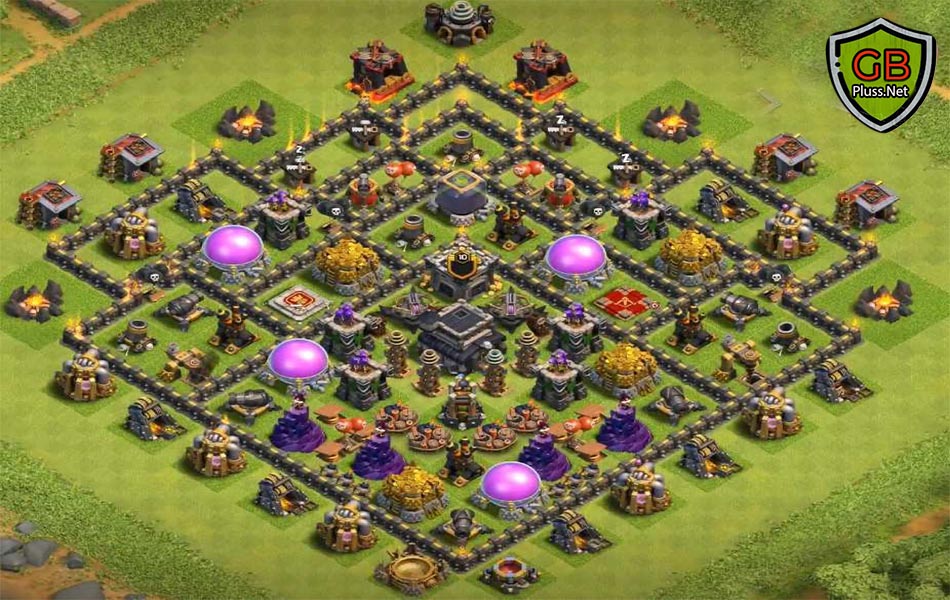 You can also take a look at images given below, here the best entries were shared along with some explanations . The results from there showed that funneling and well placed air defenses were important factors for these bases. Also, splitting your enemy’s troops is key to defending against these attacks.

The bases are designed for TH9, I don’t recommend using them at other Town Hall levels unless you’re comfortable enough with funneling. So here they are. 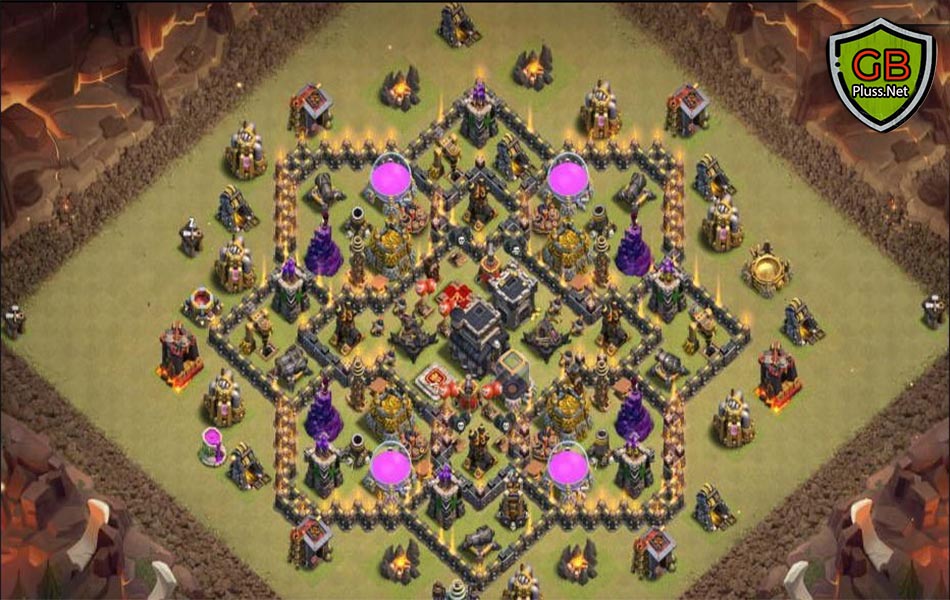 These bases are specifically designed to protect trophies against Giants, Hogs and Air attacks. They also funnel the enemy troops towards the inside of the base where your air defenses (cannons and archer towers) are located. They might not be as good as some other th9 trophy bases out there, but they’re the best that I could come up with considering my experiences in playing and recording replays for this post. 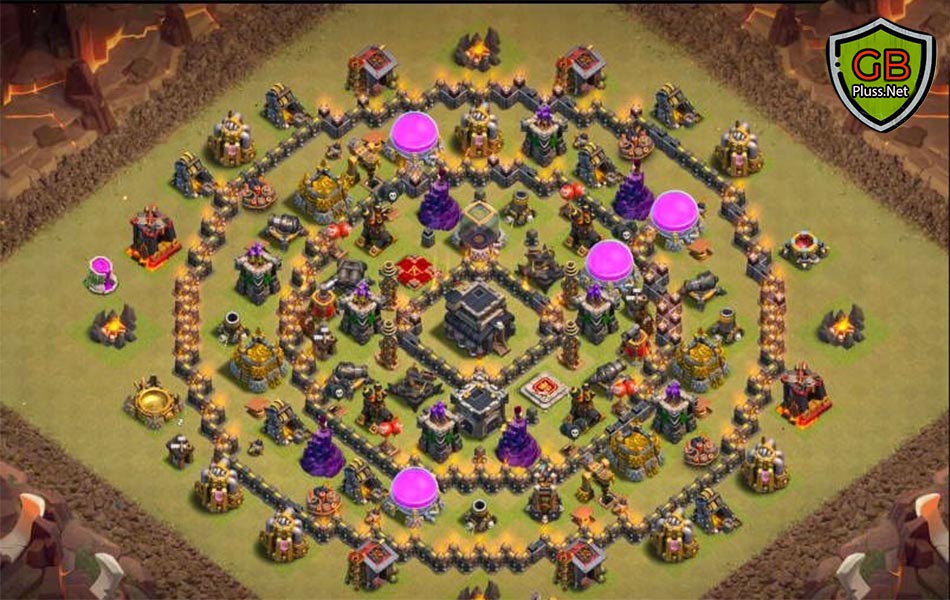 The giant bombs will blow up the giants before they can get to the inside of the base that contains your air defense. This will also lure the hogs towards the spring traps and giant bombs, this makes it very hard for them to get past all 3 traps and reach the inside compartment. 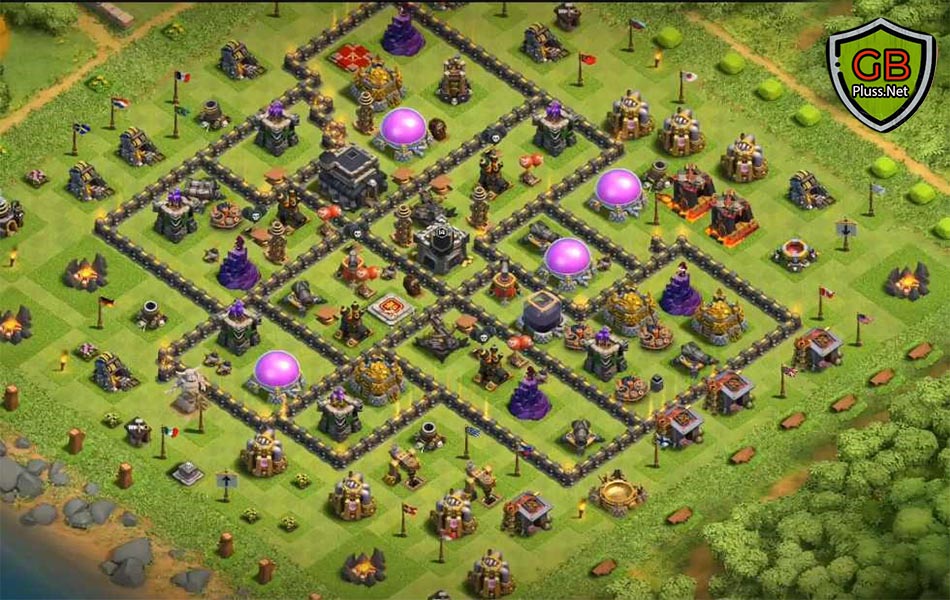 Anti Everything Town Hall 9 Trophy Base

The air bombs will take out a significant amount of troops (hog riders). After this, your spring traps will deal a lot of damage to the rest of them. Everything is funneled towards the inside where the air bombs are waiting for them.
Since you can choose which troops you want to get attacked, this base makes it hard for goho attacks and also th9 AQ walk with baby dragons. The air defenses are all located close to each other, making it easier to take down the enemy. 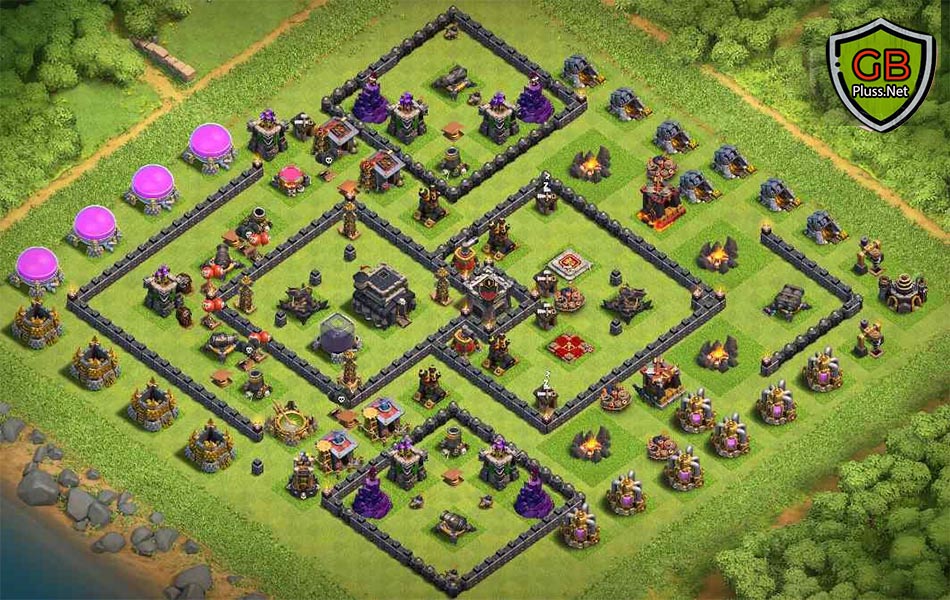 The first two bases are designed for you to place your heroes in a way that’s best against hogs/Balloons. You can also split them up but you should do this only if you’re confident about how they’re going to attack your base.
The second two bases are better against Golem or AQ Walk. You can also use them if you don’t like having to split your heroes.

If you want any of these bases without the funneling (for example, if you’re trying not to protect trophies), just ask me in the comments and I’ll see what I can do for you 🙂 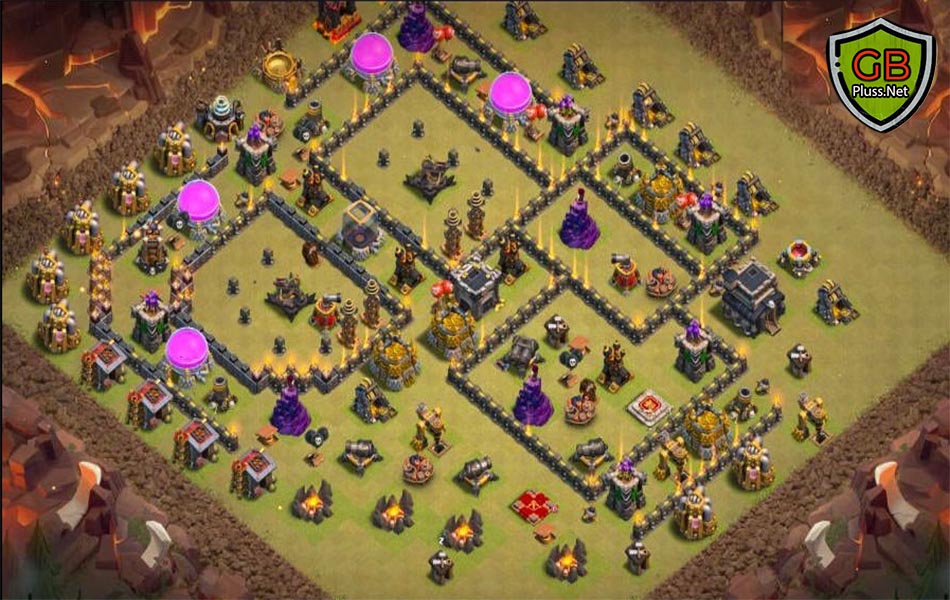 Take a look at the image below for more examples on how these bases work. A maxed th8 went against a maxed th9 using some of the layouts from this post. Some people tried loonion, hogs and barching but none of those worked out very well. You can also see the placement of the air defenses. Watch how they’re all spread out so that you can take them all down with 1 bomb from a dragon or 2 from a balloon. Clash of clans bases links about of twon halls everything is available on GBpluss.net.

Anti Giants / Anti Hogs / Anti-Air – The Bombs are very effective in dealing with overwhelming numbers of troops. If you place the wizard towers in range of each other, they will kill them fast enough to prevent losing much health.

This one isn’t the best but it’s the most common. The traps are a little far from each other which means that a lot of troops will get through before they can take out enough to stop them from getting your trophies. The 2nd ring is intended for defensive buildings or heroes only. This one has the closest the wizard towers, making them very effective at that position. 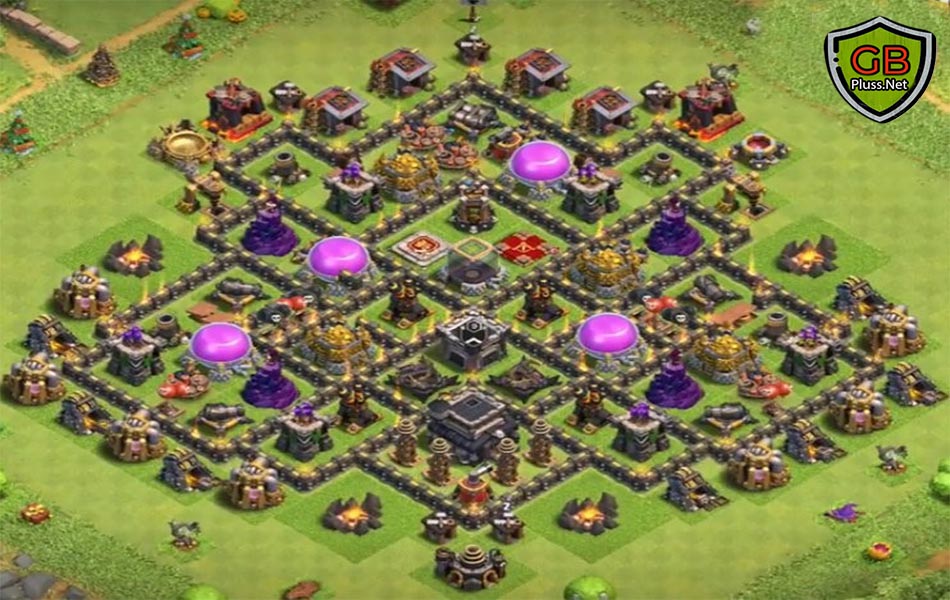