Let’s Design our TH11 hybrid base layout. It’s a trophy base that places more weight on defense than the standard farming bases you see everywhere else. The goal is to design something that not only works for trophies but also takes your war performance into consideration just as much.

This TH11 base features multiple stages of Dragon/Hound attacks. The first stage contains ground defenses, while the second stage contains air defenses to take out Dragons and Hounds. 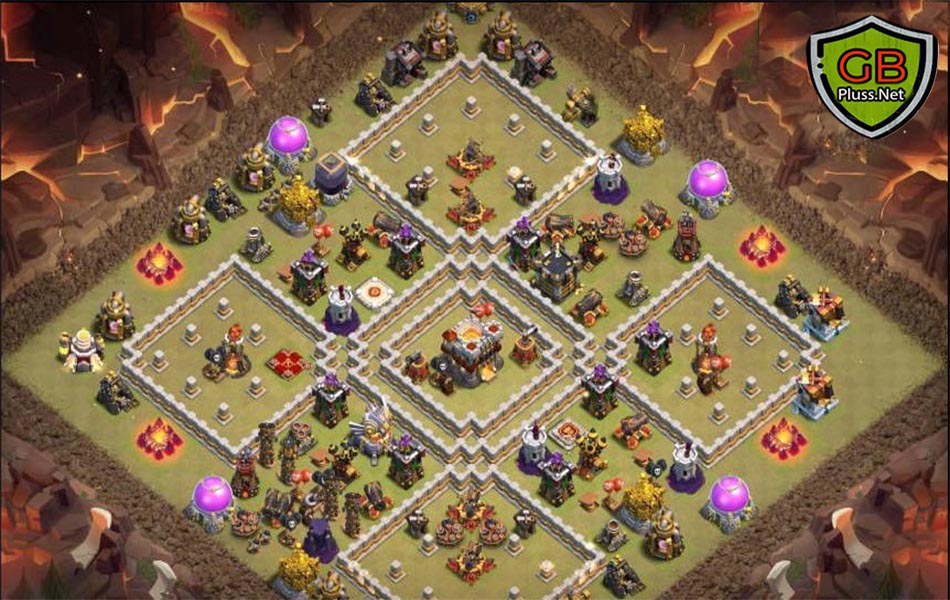 The core of this base design is a ring of double Giant Bombs which will be triggered by either Archers or Wizards in the Air Defense range. We have also purposely underleveled the defense so that they are extremely weak to Dragons, but strong against hounds. The core is completely surrounded by 3 layers of walls, making it pretty challenging for Giants or Wall Breakers to break into the center. Once inside the double Giant Bomb ring, that’s when things get interesting. Lavahound pathing is not an issue because all defenses within the core are ground based. 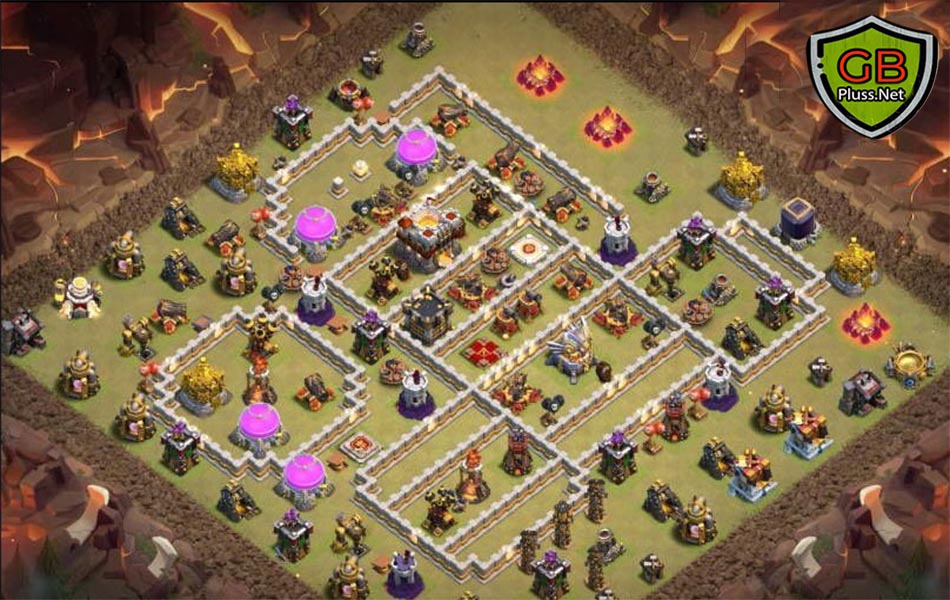 Hounds will skip past all defensive buildings, triggering both Giant Bombs to clear them out. Once the hounds are gone, balloons or Lava Hounds are free to drop on any of the base sections they wish. This TH11 hybrid base has no “dead zones” where troops can’t get in because of all the funnels and splitters.

Troops like Miners will be initially distracted by exterior funneling troops, but once they break into the core, they will trigger both Giant Bombs. That’s where all the extra traps come in to play such as this dead zone full of 4 Spring Traps triggering together. 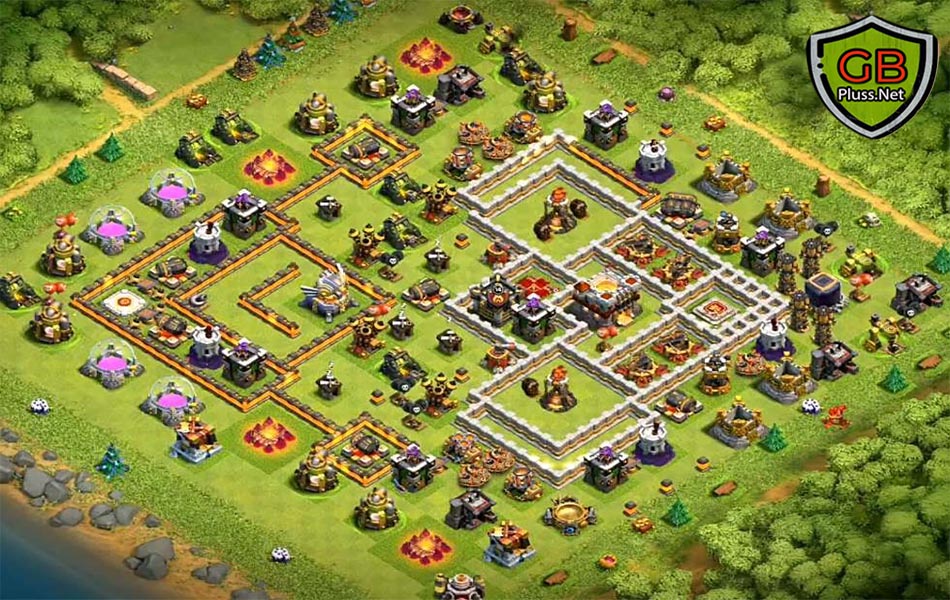 Anti Everything Town Hall 11 Hybrid Base

The placement of Wizard Towers allows you to evenly split Wizards vs Lava Hounds. Wizard Towers have been purposely placed outside of Giant Bomb rings so that they will assist in taking out the pathing troops. Once those troops are taken care of, you can then let your Loons do some work inside the base. 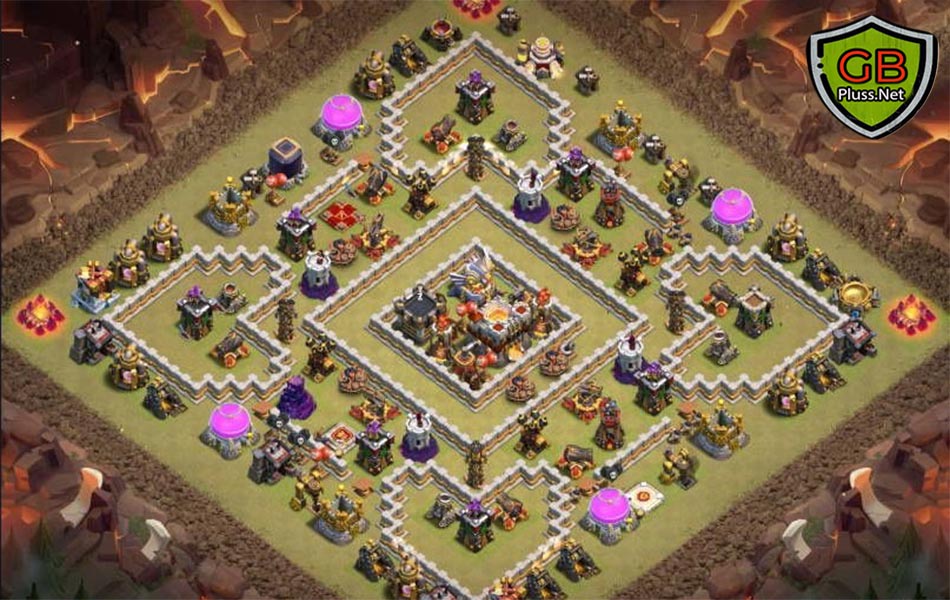 After all of this excitement, there’s still a bunch of Loons surviving which is what makes the rest of the TH11 hybrid base as strong as it is. If you’re going for a high percentage trophy push, then this might be the right base for you. Trap set up only, during the final battle! The goal here is to trap all hounds before they enter the double Giant Bomb ring. Take out the support first (Archers & Wizards) followed by Giants. Then clean-up with some Loons. 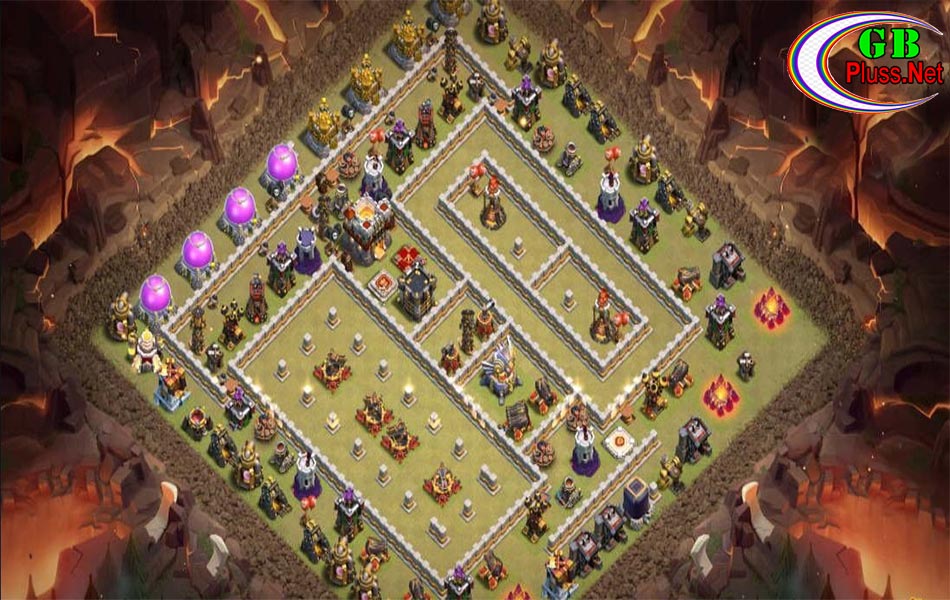 The goal here is to trigger both Giant Bombs before the Hounds walk into them. The support gets taken out first (Wizards & Archers) then Giants get dropped in. Let your remaining loons take out what’s left of the base while avoiding other traps and core troops. 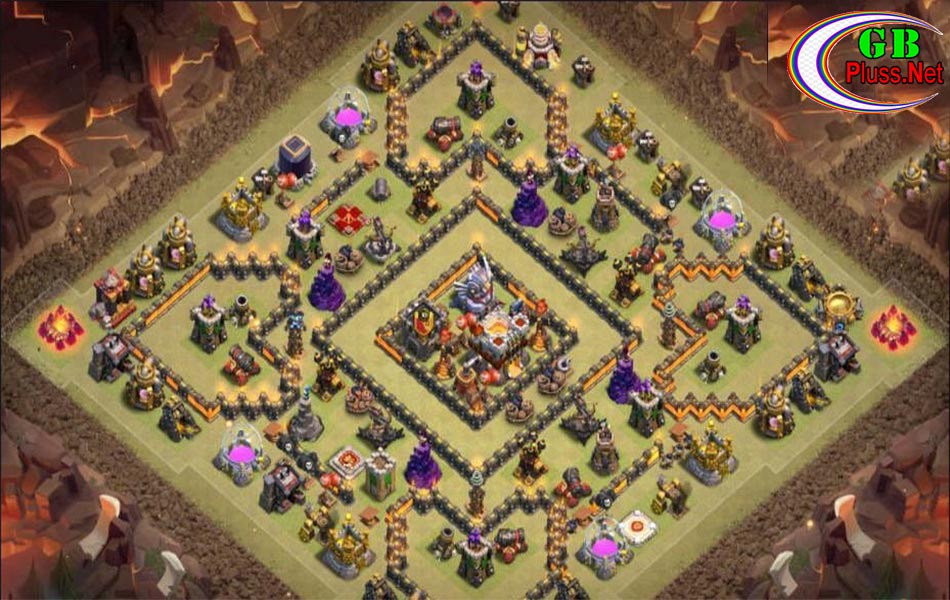 I would love to see some hybrids like these because it is a well known fact that farming and trophy pushing usually means completely different base designs. And as far as I know, you can’t design a “perfect” hybrid base, which sacrifices the advantages of both styles for the disadvantages of one. But we might be able to come close to designing one, though. 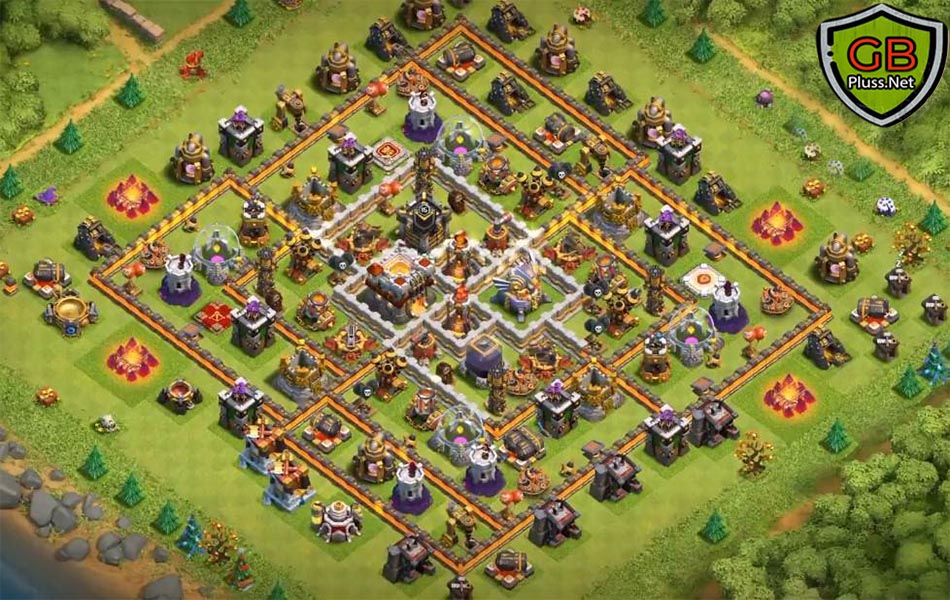 I’ve noticed these designs lately and they look like very good trophy pushing bases (besides the fact that most of them are also farming bases). Any thoughts about using these in war? I guess they would do pretty good against most attackers. 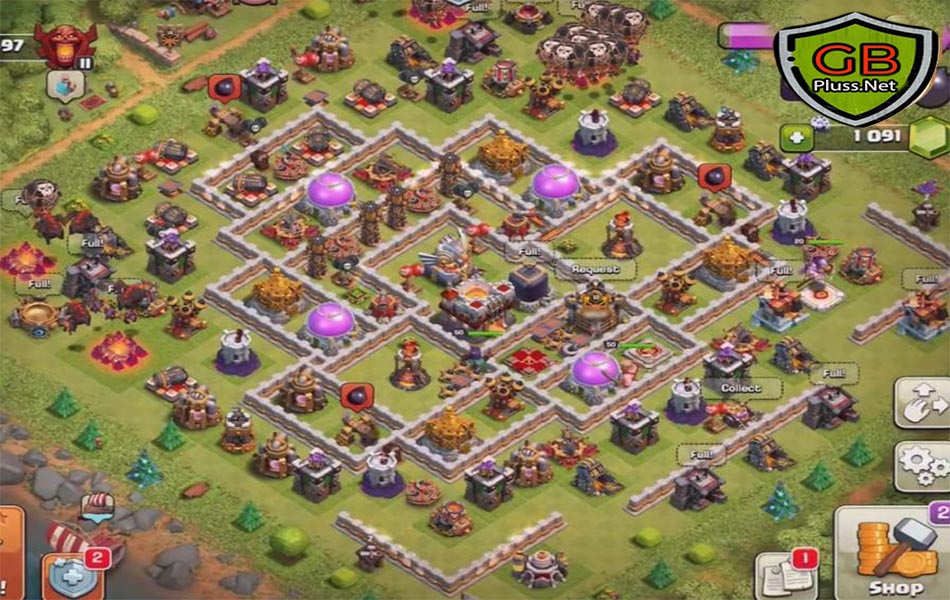 I think it is an awesome base layout in hybrid and would be better if you have enough defense buildings to put close to the gold and elixir storages so the attacker has to deploy troops from all sides of their attack. Otherwise air troops can take out both air defenses with ease. It strikes me as a base that requires more effort to create, but if you can protect both resources and your trophies(which is by no means easy) without taking too many hits then it might be worth the trouble. 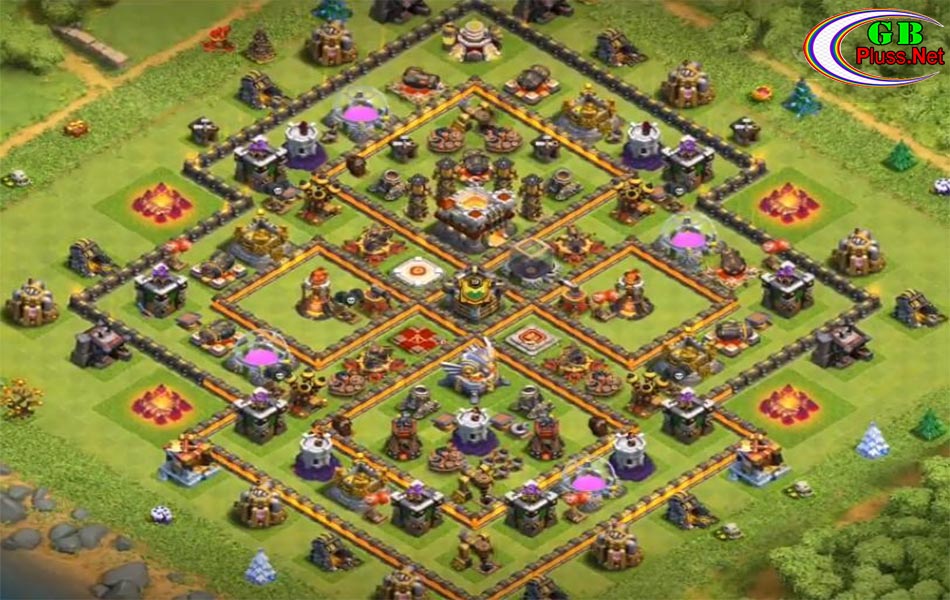 I will post some new clash of clans base layout soon. 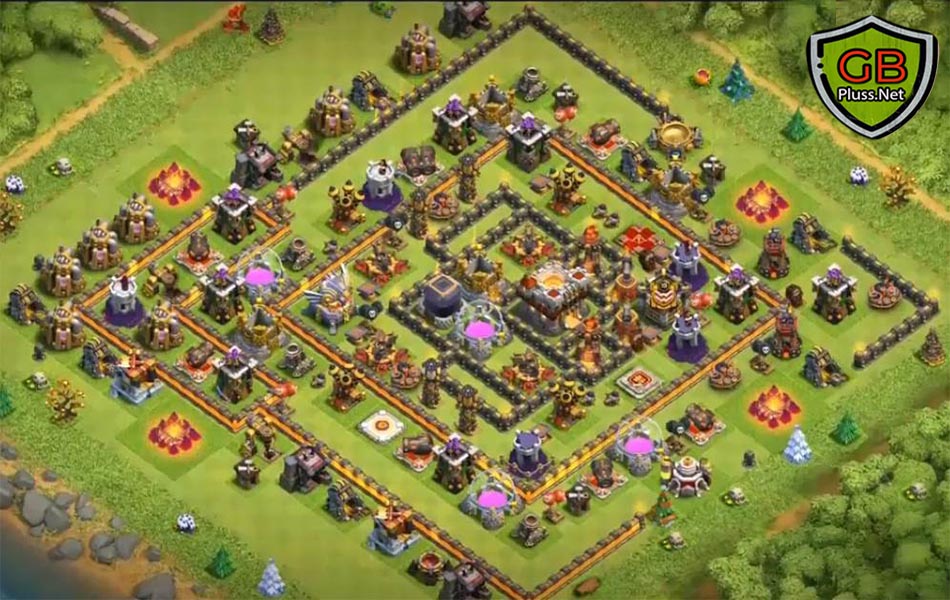