Hello and welcome! Today I decided to upload another one of my personal th12 hybrid base for you all to use.
I’m not gonna talk much about the layout so let’s just get started:

The base isn’t perfect but I really like it, especially how it can defend against both goho and gowipe attacks extremely well while also maximizing the splash damage in case of a balloonian attack.

As you can see the core defense consists mainly of teslas, wiz towers and infernos, all placed at an optimal position for coverage to achieve the maximum amount of DPS possible given its range.

I’m never tired of saying it but I’ll say it again: Never place down a Tesla diagonal to each other. 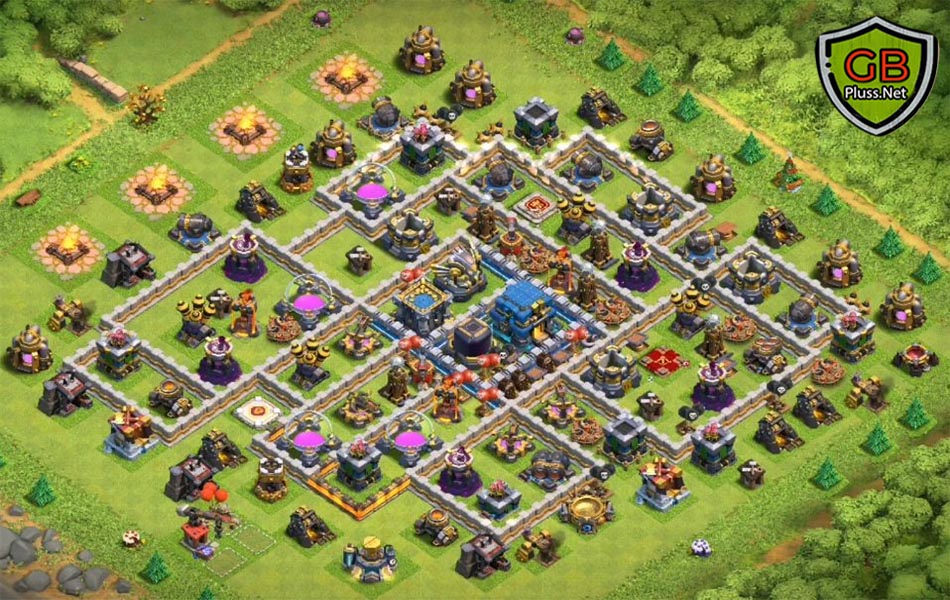 You can also notice that all defenses are centralized around the core. This will make them harder to lure out of position if hogs or balloons try to do so. The defense placement also allows them to cover the whole base and not just one side.

Finally, all splash damage defenses (wiz towers and infernos) aim outside of the walls since they’re meant for support only. 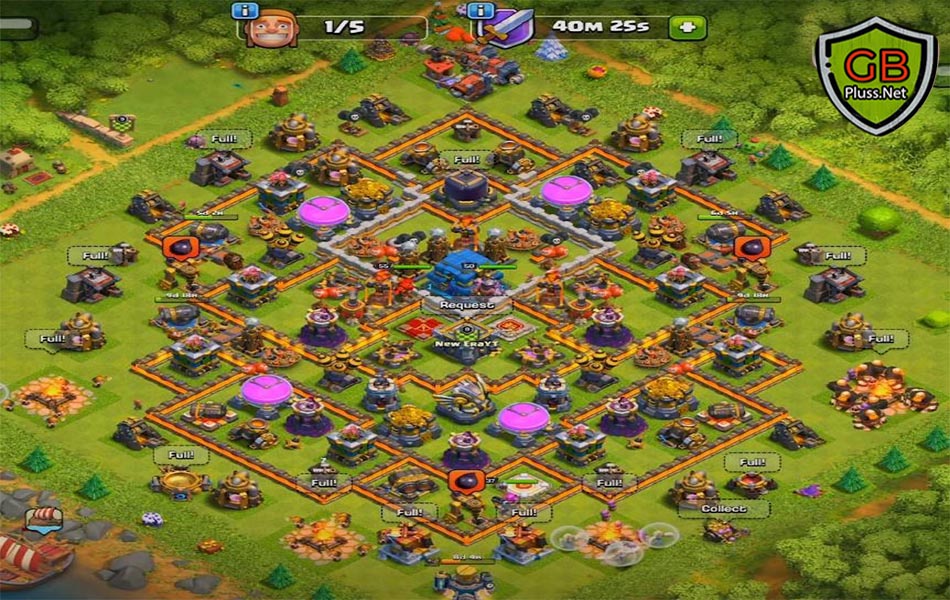 You can also notice that I used 1 additional range to my wiz towers. I don’t have the exact number right now but the difference is pretty noticeable so keep that in mind if you plan on speeding up your tesla upgrades.

Builder huts are centralized around the core for an easier troop deployment during raids. However, note that they’re not very close to each other as this would make them vulnerable to a lightning spell if somebody sneaks it in. 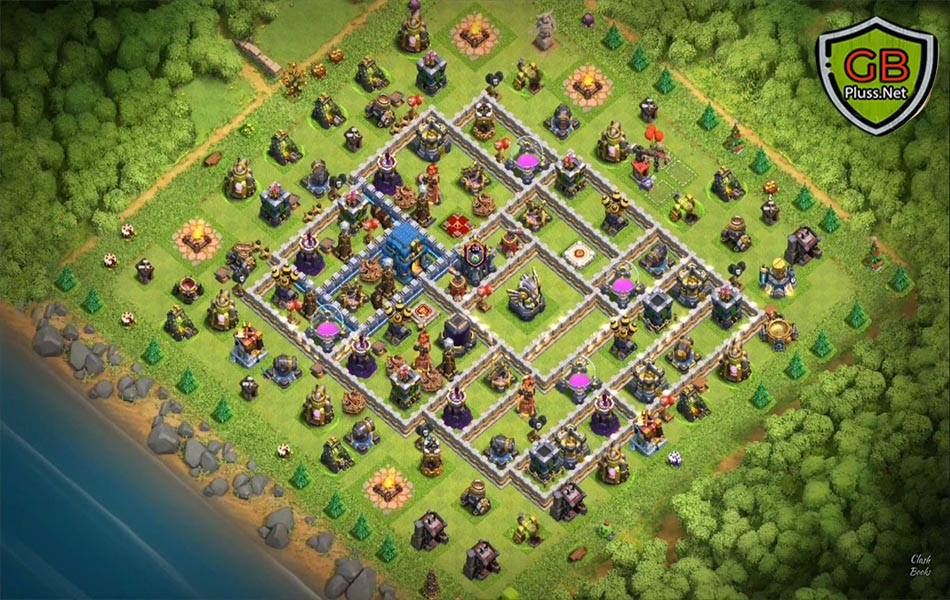 Greetings guys, I decided to upload this base I created myself since it can be useful in many cases. First of all let me tell you that this base is not 100% finished yet (I plan on improving some compartments), meaning that I still may make minor changes to it in the future. 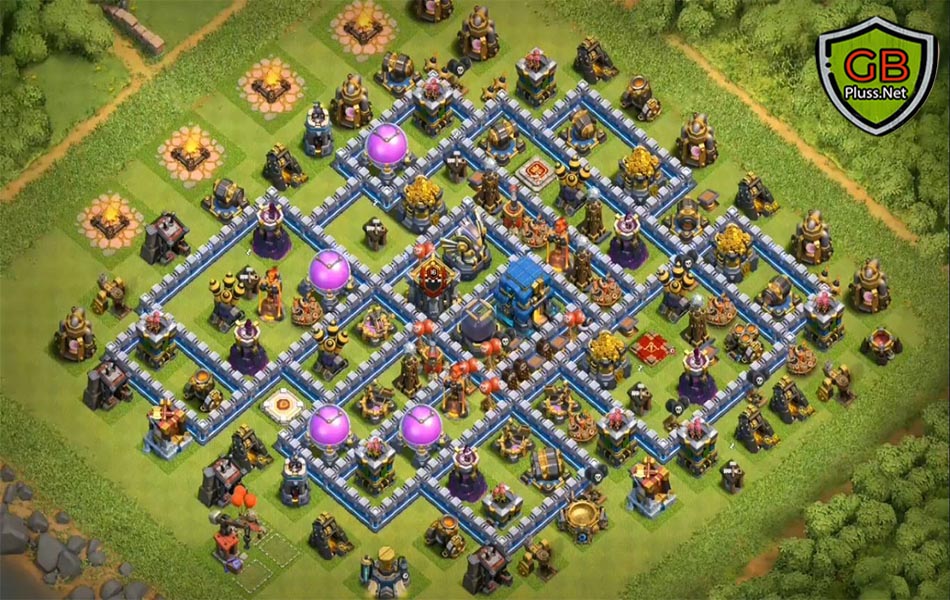 I’m not gonna talk much about the layout since there aren’t many particularities that set this base apart from other bases so let’s just get started.

The exterior defense consists mainly of teslas, archer towers and wiz towers all placed at an optimal position for maximum DPS. 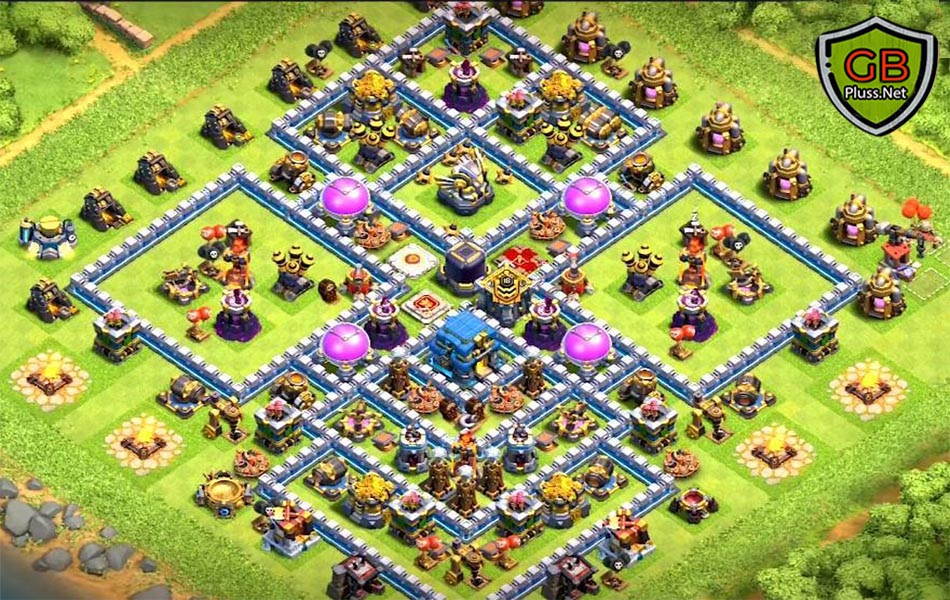 Anti Everything TH12 Hybrid Base

The core defense, as you can see from the pictures, is mainly composed of teslas and infernos placed in a way that maximizes their range. This allows for an extremely strong core defense despite the fact that I didn’t upgrade it too much. The exposed ADs are also a good proof of how strong the core can be even without a very high level/upgraded one. 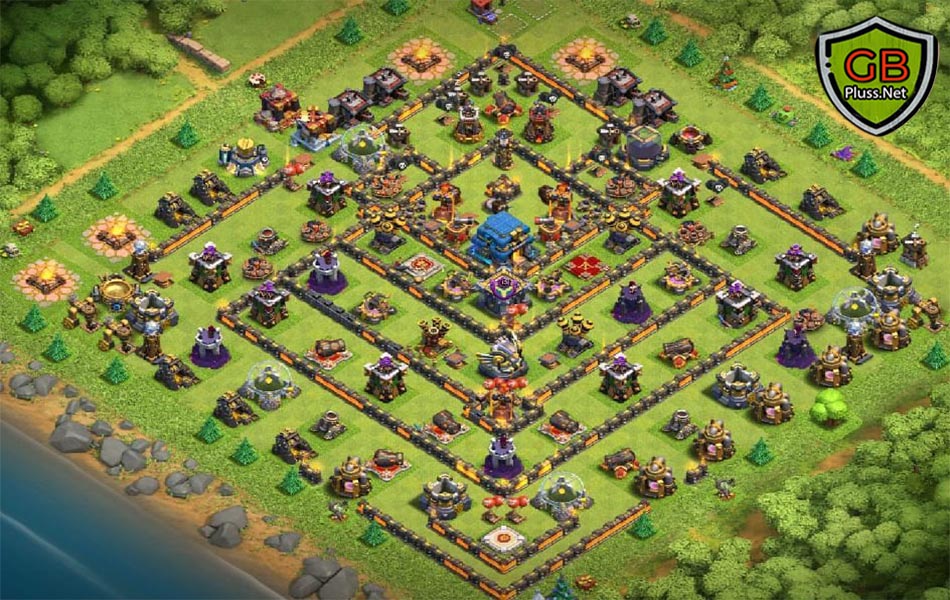 Once again, all ADs are centralized around the core to prevent them from being easily lured out of position by hogs or balloons. The air mines also help with that but I think that their main purpose is to kill minions and pekkas faster which will make some buildings survive more damage. Clash of clans base links about of twon halls everything is available on GBpluss.net. 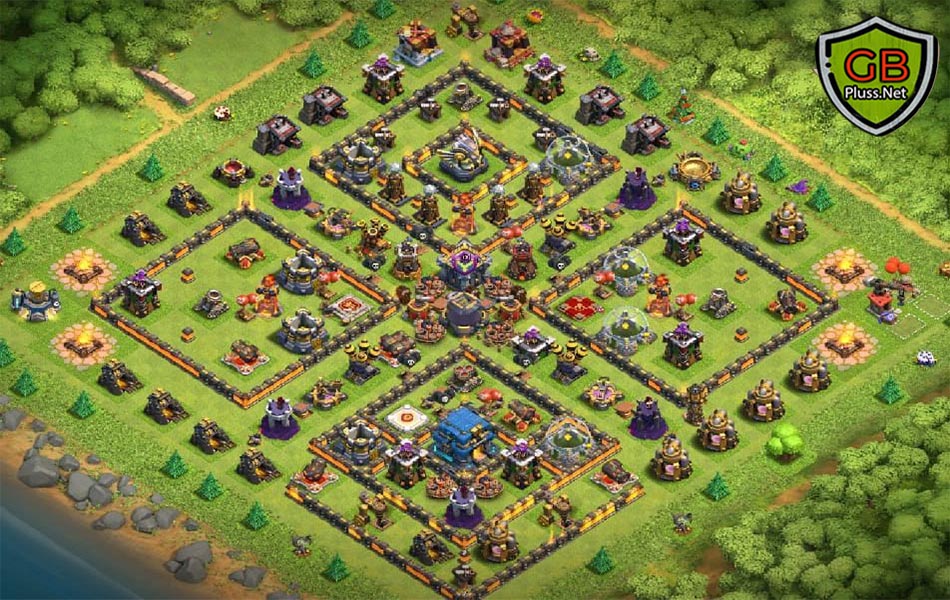 The air mines are also an easy and cheap way to improve your defenses which is why I recommend you use them if you’re low on resources. I mostly used walls with 1 range here since that’s all we can upgrade for now but if they prove to be too weak then I’ll happily change this base to maxed walls. 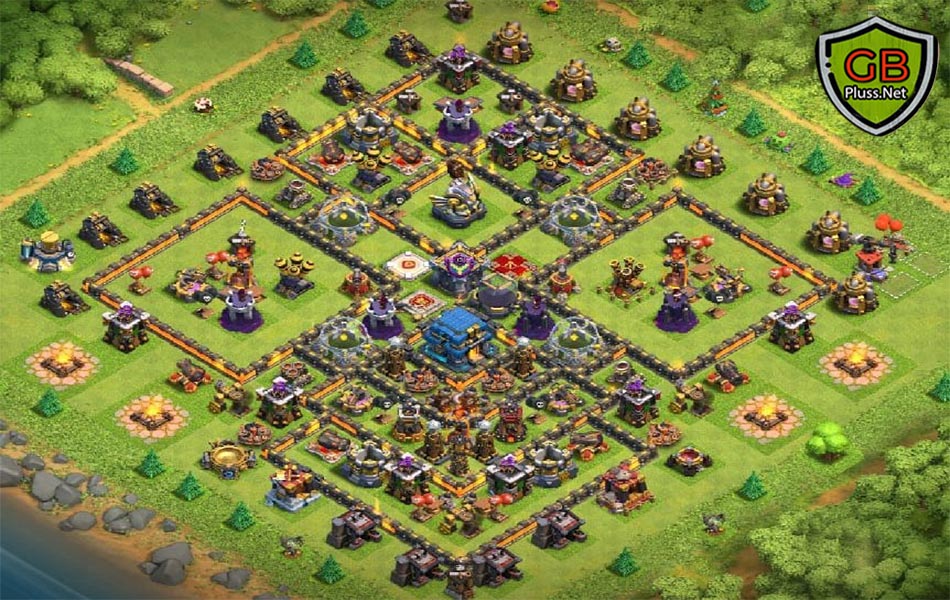 Builder huts are centralized but not too close to each other for easier troop deployment during raids. However, note that they’re not very exposed either, otherwise this would make them extremely vulnerable to lightning spells which can kill your troops/heroes if sneaked in.

I hope you guys find this base useful! See you in the next article 🙂 As always, feel free to ask me anything about the base! 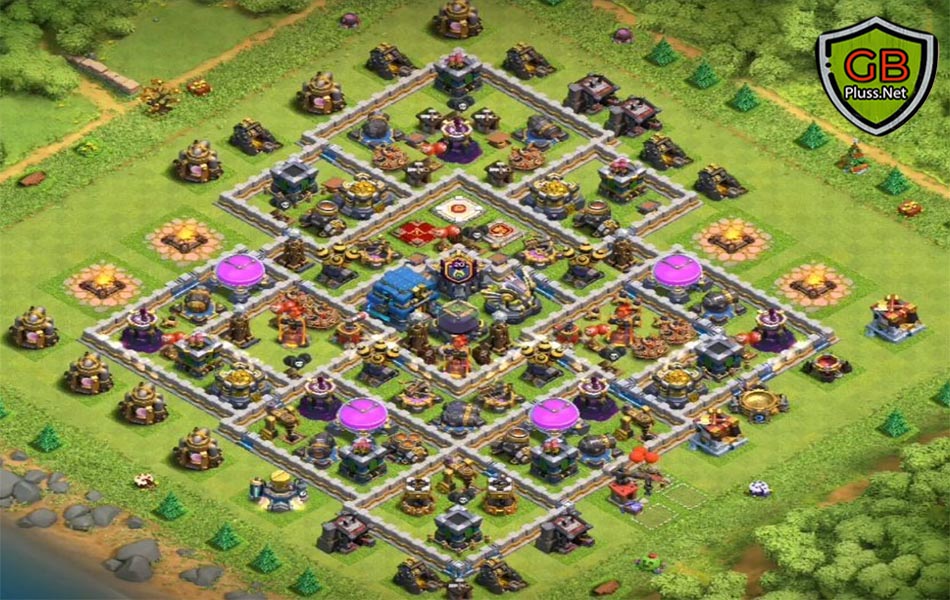 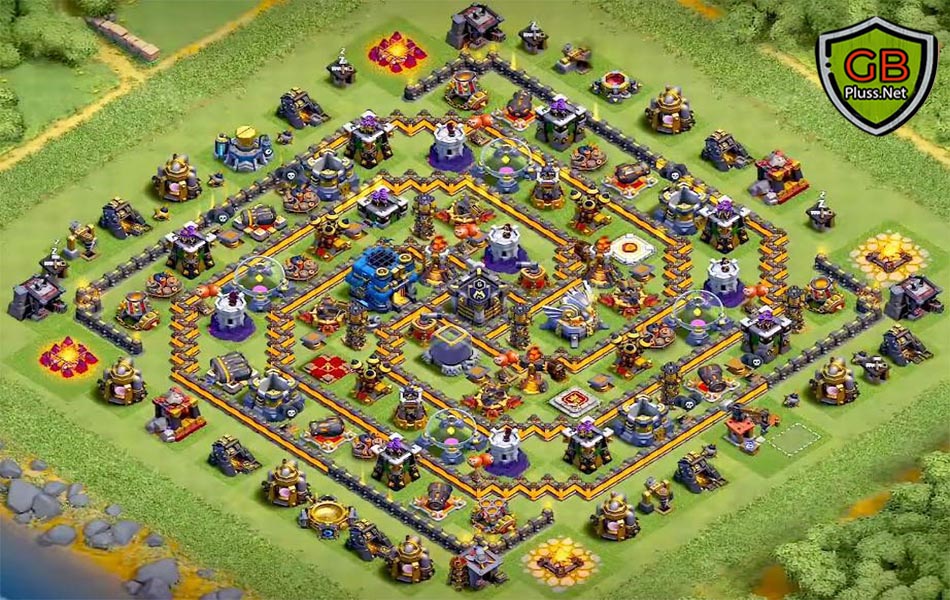